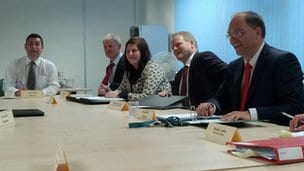 A Derby primary school has accused the city council of getting in the way of its plan to become an academy.Moorhead Primary School says its scheduled switch on 1 September is under threat because of the authoritys refusal to sign a key document.The contract asks Derby City Council to accept liability for any staff legal claims relating to its time in charge of the school.The authority says it is not prepared to take on additional financial risk.